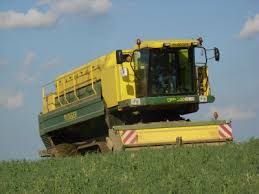 A  model that I wanted to have in 1/32 was this pea harvester. For people who doesn’t know this machine, the harvesting head tears the whole plant, all is separated in a huge cylindrical treshing system. Peas falling down on the machine’s bottom and they are transported by a convoyor chain in a hopper just behind the cabin. The rest of the plants is evacuated at the rear of the harvester. They are impressive machines and it s very current to see 6, 7 or more harvester in the same field.

I chose to make the Ploeger because it’s the most famous machine of this type, the EPD 530 is most widespread (slowly replaced by EPD 538 and now the new EPD 540).

On this picture the machine is fitted with tracks on the front axle, on my model I would like to put wheels (the wheel configuration exist too). I prefer the look with wheel and it will be more simple to make a functional levelling system.

For this machine, I will not use any basic model. Only a Claas cabin will be recovered, the rest will be mainly in styrene. I will essentially work with photo taked by me and the 2 sketchs presents in the commercial brochure.

Here is the beginning of the main frame, you can see the place for the hopper and the rear axle balancer.

Next, I have mounted the front wheels. These wheels came from Artisan 32.

As I explain in the introduction, I want to reproduce the machine’s leveling system (balance) this mean that the front wheels are mounted on eccentric hub.  By modifying the position of the right or left hub, the corresponding wheel go up or down and the machine reclines. We can see too the leveling piston for the rear axle; it will be changed later for a better one.

The rear axle is built, As you can see it’s functional. More details will be made later, it’s fit with Artisan 32’s wheels. I made the conveyors that recover the harvest at the bottom of the treshing system. I will have to put a mass in this piece because the machine switches because of the front header weight. 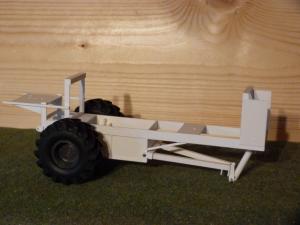 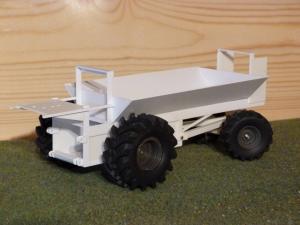 Making the “floor” as I call it. On this part, a big housing witch containg the treshing unit will be adapt. On the rear side, we can see the engine’s housing. This “floor” is an important part for the Ploeger, it stiffens the model.

And here is the treshing unit’s housing, as you can see it takes a lot of place! 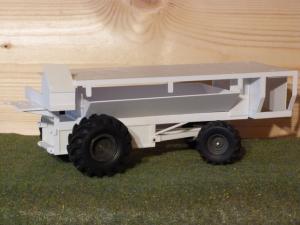 Engine’s aeration grids was made and oil cooler on the top of it. I have put too the conveyor’s sheets metal on each side. They are not very close to the machine’s body as the reality.

The pea hopper is installed. On this kind of machine, the unloading is realized by a belt conveyor, in unlike other brands with tilting hopper (BCMH, FMC, PMC,…). The machine can be buy with a belt conveyor on the right side or on the left side. I choose the left side for my model.

Next pieces are for the top of the hopper, they are 2 stacked belts. Peas can ben cross them freely so much that the rest of the plant is eliminated by the belt. This assembly stiffens the machine too. You can also see a new piece to attach the cabin later. 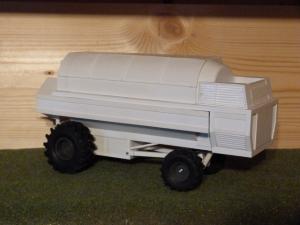 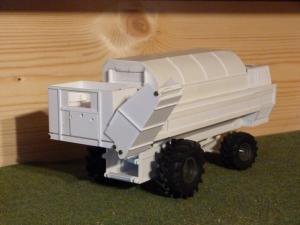 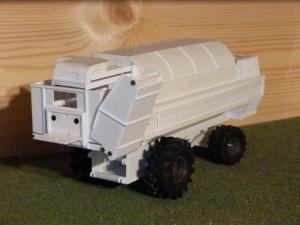 And here is the cabin, I recover a cabin from the Siku Xerion. This one is not very detailed but I will improve it. I had already make a new back for it to attach it.

The arms carrying the harvesting head were installed. The lift and cylinders are of course functional. You can see on the plate at the front a buttonhole in an arc, this buttonhole will allow the harvesting head to follow the ground independently of the machine which, it will be level (remember, the levelling system).

We attack the last big piece, the harvest head. Here is the main block installed on the lift. Now that all the big parts are made, we realize the volume of the machine, it's time to check that everything is well proportioned before going further. It's good for me, I can continue building!

Assembly of the front cover (opening as you can guess with the cylinder and functional) and the top cover. Under the cup I also placed the roller that reigns the height of it. It is actually a smooth roller that takes the whole width of the head (we do not see it in this photo). 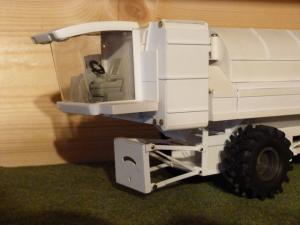 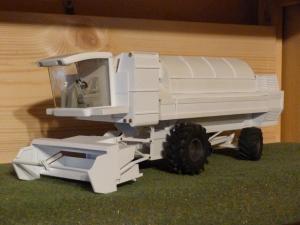 Implementation of the access ladder. So yes, if you've ever seen machines like this you'll tell me that the ladder is not at all like that, it comes down to a very flat bar ladder attached to the harvesting head. You're right except that on some versions, we find beautiful scales like this, so I did not lose myself. It is functional and can fall back. We also see just in front of the dome hoods rounded on each side; these are the protective covers of the bucket chain. This chain goes up the peas from the bottom of the machine to the belts above the hopper.

I explained to you the balance (left / right level correction). Here is the explanation front / back. When the machine goes up or down a hill it is not level. In order to level the front / rear axle as well, the rear axle lowers to raise the rear of the machine (or raises to lower the rear of the machine) and compensate for the tilt. Combined with the left / right balance, one thus has what is called integral tilt compensation. 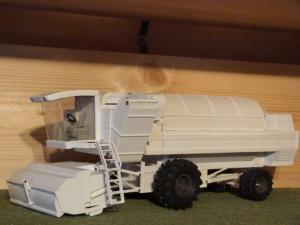 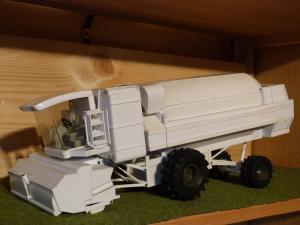 We now move on to finer details. Here above the hopper, I added the protection grid, some ribs in the hoods, the bucket elevator that can be seen on the top and a maintenance ladder. The connection between the harvesting head and the machine is not yet done, I attack it. We see the exit conveyor of the cut that "throws" the harvest in the entrance mat to the treshing unit.

A quick tap on the back now with air filter and functional exhaust. 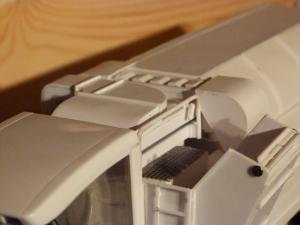 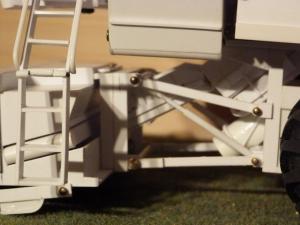 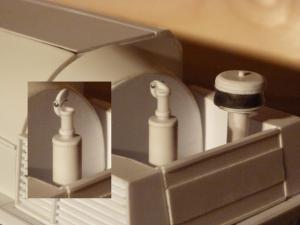 I had the opportunity to recover a cabin Claas Cougar UH cabin far more beautiful and detailed than I had. So I made the exchange with this one. This involved a modification of the cabin floor but I think it was worth it. You can also see a ladder of maintenance installed at the back as well as beacons.

Then some details of the rear axle. The nails too long will obviously cut to good length! Functional steering cylinders and a brand new cylinder for tilt compensation made from a collapsed radio antenna. 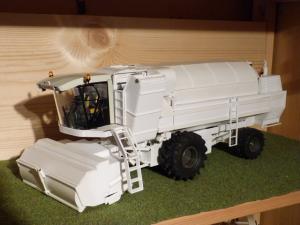 And here are the last installations before painting; I made the bodyguards along the treshing unit, all the headlights and lighting, some hydraulic equipment, the beacon of the harvesting head, the wheel chock, and the lights. 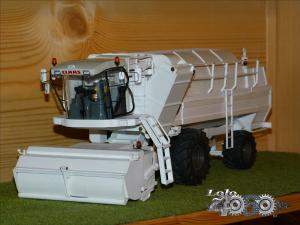 Madame is ready for painting!

So let's go for a disassembly session. I always arrange to try to have the most removable part possible to facilitate painting. We have here more than 120 pieces and above 40 axis. Here the pieces are already painted and the stickers have already been affixed for ease. 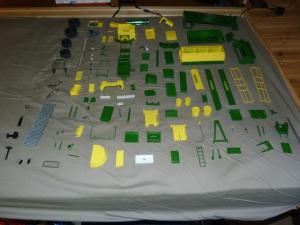